Back then there was a reasonable list of contenders, from Japanese heroes, Aussie thumpers and Das Euro Express, Jah!

If my upper limit wasn't the imposed $60K what would have dialled up the fun-o-meter to 11 is the Mercedes-Benz A45 AMG Auto 4MATIC. I was jogging one evening with a mate along Nottage Terrace in the city, a bloke in a brand spankers white A45 AMG gave it the full treatment off the lights.

No word of a lie this thing sounded like a full on Group A touring car; such was its thunder. It streaked by like greased lightning, its howling passage music to my ears. Of course, I let out a "WTF" expletive.

Today that same car with low k's on the clock can be had for under $60K AUD. I'm sorely tempted to trade my current Japanese AWD sushimi slasher for the German Das Wunder auto; it's not going to happen because I value my personal safety, I know my partner would be opposed to the venture.

If you don't have said restrictions, here's why you should check one out.

265kW @ 6000rpm of peak power from just 2.0-litres displacement, a four cylinder at that! That's V8 territory right there. Maximum torque of 450Nm from as little as 2250rpm, yeesh, it's going to thump you in the back.

To prove those aren't numbers for bragging rights the 0 to 100km/h dash is a scant 4.6 seconds. The all-wheel drive ensures it's got phenomenal grip off the line. For a hatch configuration, it has to be one of the most impressive looking cars in its class.

Some credit it as the first hyper hatch, reason enough alone to go out and get one. Game over. 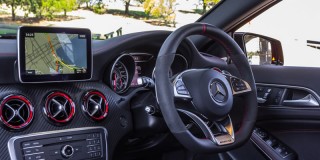 We test drive the 2017 Holden Astra Hatch: too much for Nana

Mercedes Ute lands down under